From the rare to the obscure, we introduce to licensed legends of a different flavor from the Phantom and the Shadow, although they each have more in common then we care to admit. Charlton picked the more widely known television property to publish, while Mighty/MLJ's successor Archie Adventure Series produced a series based on a failed toy line. 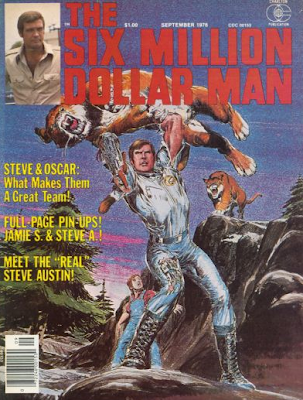 Everyone in the 1970's knew Steve Austin (no no, not that wrestler!). Former Vietnam vet, former astronaut turned test pilot turned crash test dummy. Fear not for his shattered right arm, left eye and both legs would be retrofitted with technology that cost upwards of... you guessed it... six million dollars! And then, a legend was born that Charlton could not resist! 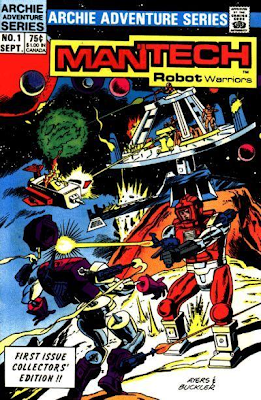 A disclaimer before we introduce Archie's bionic bad boys... to introduce this tripe in the same breath as a TV classic is sacrilege. However, we are an equal opportunity blog and feel obligated to show the other side of the coin. With that in mind we present... ManTech Robot Warriors. From the neck down, they're robots set in a future era with only human heads. 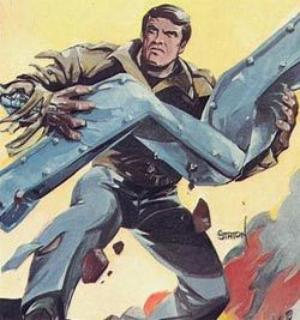 6,000,000 had fame in 1973, in fact he was a cultural icon. However, his comic book series lasted only seven meager issues. While it had a different dynamic and feel that revisited the original novelization of his story and less of the television series' influence, it didn't sell well. Probably due to Charlton's terrible distribution network at this time. He was vastly powered up with laser eye and other upgrades in his new body. Still all the essential elements were there, including faithful boss and friend Oscar Goldman. And one other element carried over... 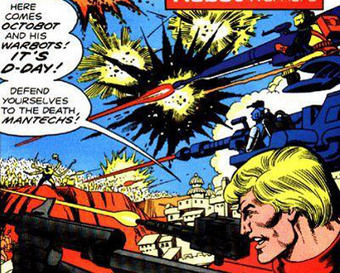 Back over at Archie, let's dissect the ManTech men a bit more. Scientist Jaxon Goode on the planet Mekka finds three ancient travelers in an equally outdated vessel with futuristic technology. Merging men with machine, he introduces the world to Man Tech: composed of Lasertech, Aquatech, Solartech. Of course, his arch foe the Tyranik creates his 100% robot forces to combat our heroic horde. And did Doc Ock ever get a commission for infringement of copyright from Octobot? I think now! Oh and the actual toy line had interchangeable heads... ho hum. 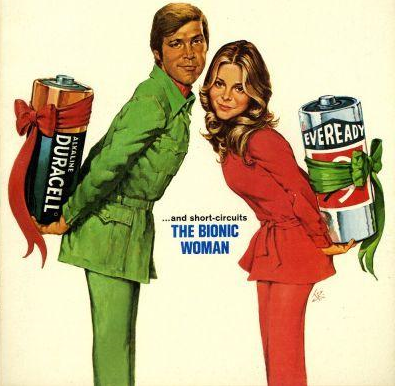 Oh yes... back to 6,000,000... how could we have forgotten our big human hunk of change? Well, like the show, he soon dragged a poor unsuspecting gal into his life of gears and diodes. The above picture (not from Charlton but so dang cute) shows Jaime Summers aka the Bionic Woman, a product of Dr Rudy Wells as was Austin. Her five issue run was not as well remembered, however, and there were no direct crossovers. Not even Maximillion - Bionic Dog - had a chance to shine in this short period (well we still had Robby the Robot-Dog). 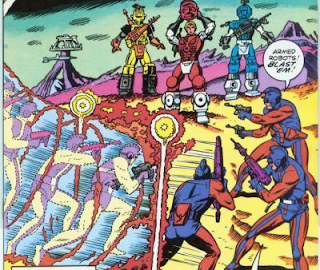 Towards the end of ManTech's series, the three cyborgs return to Earth only to find it a waste due to corporate greed. They resolve to continue to protect their adoptive world from the same sadistic view towards the environment due to ongoing warfare. This was among the first comics that actually introduced the thought of environmental degradation that now is commonly acknowledged. While this series was more impressive than the toys it spawned from, it didn't have the staying power to last the cancellation of Archie's Adventure Series line. At least it wasn't alone.
And still there are several more licensed properties that both publisher's had tackled over the years, some more successful some less so. Soon...
Posted by Doppelgänger at 12:00 AM

The Six Million Dollar Man seems to epitomized the style of stories from the early to mid '70s in mainstream media. In some ways it was just a little to tame and contrived while comic books at the time tended to begin pushing against this a little earlier than other media types.

Those 70's shows were big yawners for me, quite frankly. Six Million, Wonder Woman, the Hulk... and NONE of them faced worthwhile adversaries. I know budgets were tight but not even for a season finale? Yikes.

Kinda like all those crappy Batman and Superman comics from the 40s when they just foiled regular crooks.