As previously mentioned, in a previous composite reality that has since been wiped clean by another cosmic crisis in the DC Comics universe, the merging of several parallel planets led to the incorporation of the Mighty Crusaders of Earth-MLJ and the Action-Heroes of Earth-Four, twin teams originating in Archie and Charlton Comics. As such, although the concepts were still there at their core, they were radically revised to incorporate modern sensibilities and to water down their impact on their world. 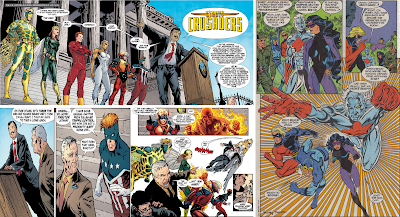 The reason for the former was that, for instance, having a guy known as the Web simply being a criminologist wasn't enough... he had to be a blending of Tony Stark/Peter Parker, and similarly with Captain Atom... he needed to ditch the conventional costumes of his silver age incarnations for a shiny skin and sassy style. And the reason for the latter is that this world already had their premier superhero team, the Justice League, and their original team of mystery men, the Justice Society. These guys couldn't outshine DC's finest of the past and present, so they both were made into essentially G-Men working as federal agents when the need arose, which was seldom it seemed. For the original Shield and Captain Atom, that worked since they were government agents as it was and in their own worlds they had plenty to do, setting the tone for their fellow fabulous folk to follow. Sadly but logically, neither the Crusaders nor the Sentinels of Justice could get much traction in this scenario.

Thankfully, with a new DCU now in existence this sad state has been wiped clean, at least for the Crusaders who return to their native world to pickup where they left off welcoming in a new generation of heroes... who look to them as their "Justice League" or "Society". If only the good Captain and his costumed crew could say the same, since they remain on a world not their own and one that will never treat them as they should be treated. However, glimmers of Earth-Four where the Sentinels of Justice operated can still be found through the Multiverse!

Posted by Doppelgänger at 9:14 PM

Two of my favorite sets of heroes, both sadly neglected ans misused...