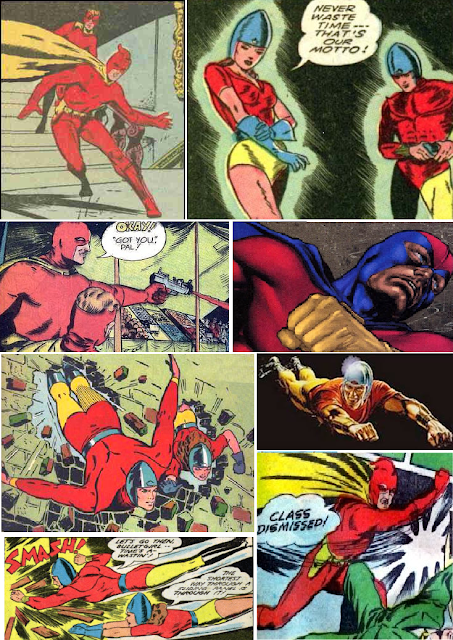 While touching on the various heroes and heroines of Fawcett Comics at times throughout our examination of the DC Multiverse, two dynamic duos deserve some long overdue attention.

Bulletman and Bulletgirl, aka Jim and Susan Kent, were known as the Flying Detectives and were their own world's version of the classic Winged Wonders of Hawkman and Hawkgirl. Similarly, attorney Brian Butler and his ward also had the distinction of being Gotham Guardians, as they both lived and protected a Gotham City of another Earth as Mister Scarlet and Pinky. Within the context of their reality, what became known as Earth-S, these four fearless fighters were as important as were their more famous caped and cowled contemporaries.

In fact, the Bullet pair were more successful than the Hawks as their popularity meant an ever growing family of characters, second only to the Marvel Family whom they teamed up with on occasion. As for Scarlet and Pinky, they were itinerant masked men drifting from job to job, yet maintained a wonderfully glib interaction with each other that made the best of the dwindling returns from them costumed crusades.

Largely, their vast array of adventures, adversaries, and abilities have been left untold in a modern context... until now. Join the review at Fawcett's Finest: Scarlet and Gold.
Posted by Doppelgänger at 6:19 PM