Today we see the genesis of Charlton vs Mighty MLJ... some interesting quotes that tied the two publishers' creations together in a historical context... and caused yours truly to examine them as parallel universes ultimately attached to the DC Comics multiverse. First an interesting pic from Shadoblivion's web page which nicely echoes the acclaimed Watchmen cover and the characters involved: 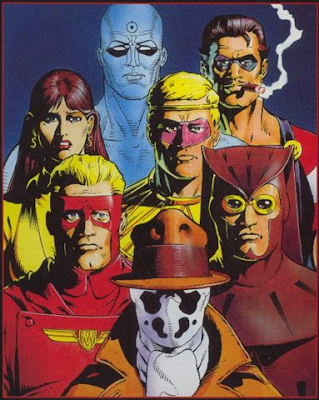 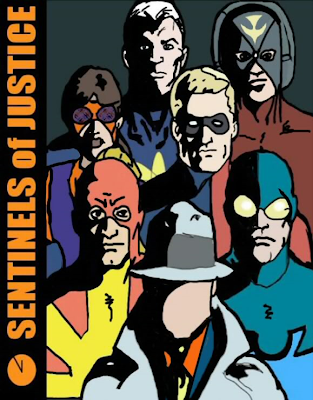 And from Charlton, (from top left to bottom center): Captain Atom, Peacemaker, Nightshade, Thunderbolt, Judomaster, Blue Beetle, and the Question. While listed as the Sentinels of Justice,  three of them: (except during Crisis) Peacemaker, Thunderbolt and Judomaster weren't offical members.


What is interesting is the following quotes from Comic Book Artist #9:
When you compare the golden age crop of MLJ heroes (see below for our heroes in all their grandeur): 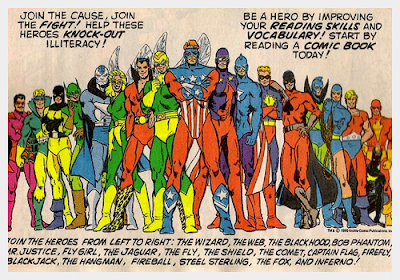 Then compare them to the Watchmen's fictional precursors, the Minute Men from the same 1940's era: 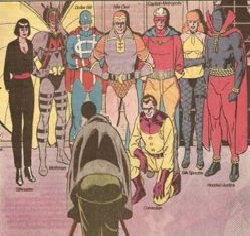 Immediately, the character that most imitates his inspiration is Hooded Justice, whose noose around his neck calls to mind Hangman. How about Dollar Bill and Blackjack (how many dollars have guys named Bill and Jack lost while playing this card game)? Mothman and the Fly are no-brainers, or if you want a oldie moldie comparison perhaps Firefly? Nite-Owl and Black Hood have the gimmick clad knights of the night modus operandi going for them, while Comedian and Black Hood have similar sense of costumed flair. Regardless, that these two sets of characters were the dawn of a literary classic.
Posted by Doppelgänger at 12:00 AM