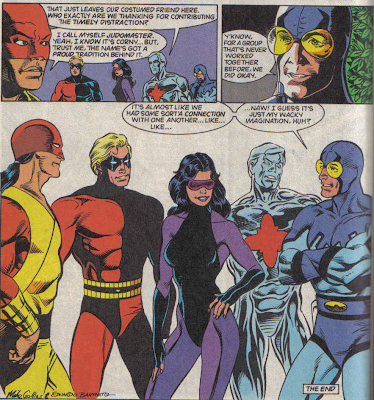 In Justice League Quarterly #14, an old enemy of Peter Cannon's resurfaced to reclaim what he felt was taken from him by Thunderbolt, the preeminent position in the Vajra. This villian, Andreas Havoc, attempted to psychologically tear down Cannon's mental might but was circumvented from doing so by a quartet of allies he had a strange affinity towards.
With Nightshade, Captain Atom and Blue Beetle assisting T-Bolt on one front, a new Judomaster appeared to aid the heroes on yet another. What was borne from this assemblage of avengers was the aspirations of all fans of Charlton Comics, with *most* of their characters teaming up (notable exceptions being the original Blue Beetle, Son of Vulcan and the Question, while Sarge Steel only made a cameo).
Alas, this potential paragon of protectors never had a chance to thrive as this was a one-shot adventure, much like the Sentinels of Justice had been some sixteen years before this issue.  Why didn't this group gain more traction, given DC Comics' desire to spotlight these recently purchased properties? Perhaps because they felt that individually the charcters had more chance of success being distributed thought this fictional universe's teams and solo titles. Or, more probably, the sales figures didn't reflect strongly on there being a strong enough fan base for such a continuing series. 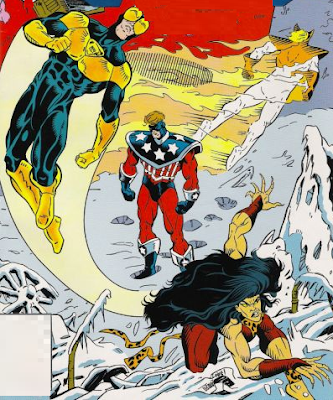 The harbinger for such an argument is the short-lived 1992 !mpact Comics' Crusaders series. Although a novel concept itself, it languished in its watered down versions of tried-and-true silver age stalwarts from the Mighty Comics era. Still, there was a certain charm in this pairing as there was with the Sentinels of Justice League. Still, there was one more incarnation of Charlton crusaders yet to come...
Posted by Doppelgänger at 12:00 AM

The last few issues of JLQuarterly are used to spotlight other groups of heroes tangentally linked to the League: #12 introduced a new Conglomerate while the last issue (#17) showcased the Global Guardians!