Notable former sidekicks that turn on their mentors, at least temporarily, have grown in this modern age of comics. Previously, a boy hero was loyal to his mentor throughout his career from youth to adulthood. Yet now, such characters as Jason Todd (the former Robin II) and Bucky Barnes (original ward of a certain Steve Rogers) became fueled with a rage spawned in part from living in the shadow of their earlier rolemodel.
Add to the list Tiger, a lad whose career actually started in emnity as he soured on a Rip Dagger until learning that this seemingly cocky caucasian was secretly Judomaster a man more honorable then the Japanese warrior known as Cat, who earlier held sway to the affections of the kid. 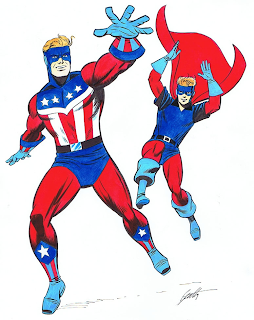 Thankfully over at MLJ Mighty, the premier  prepubescent partner, Dusty remained tried-and-true to his guardian, the Shield. Although there is the never explained mysterious decades long disappearence of the Boy Detective, hinted at when the time-lost lad was pulled from the 40's into the 60's during a Mighty Crusaders case. Upon seeing the colorfully clad lad, the Shield's son felt a tinge of guilt when his identity was called into question by the boy despite the second Shield's similar appearance to his legendary father. This was later reinforced by internal monologue of the original crusader, who retruned from decades of suspended animation, pondering on what became of Dusty. If he did not turn to the dark side, did the dark side somehow claim him instead?
Further developments would shed some light into what became of Tiger and Dusty from then until now...
Posted by Doppelgänger at 12:00 AM 0 comments

Around the same timeframe that Americomics Special came out from that publisher, debuting the Sentinels of Justice for their one-time official team-up, Red Circle dug up their heroic properties for another go-around. Only this time, they were serious about it.
Highlighting the same characters, more-or-less, that graced the pages of the original series in the mid-60's, the Mighty Crusaders were now a force to be reckoned with... complete with their own recurring adversaries in the form of Eterno and their arch-foe the Brain Emperor. 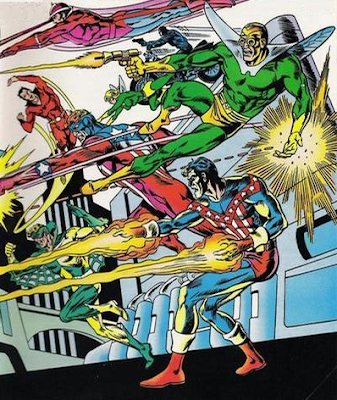 The Mighty Crusaders towed the line between edgy and kid-friendly in their approach to crime. And they came equipped with the franchise player (Fly), energy-weilder (Lancelot Strong), flying powerhouse (Jaguar), urban avenger (Web), female member (Fly-Girl) and living legend (the Shield). All filled in their niches nicely.
And the difference between them and the Sentinels was they were their world's greatest heroes. Now Captain Atom definitely would qualify as one of his, but Nightshade, Blue Beetle and the Question? Not so much. With Atom wearing the multiple hats of franchise player/flying powerhouse/living legend, the rest pretty much over compensated on the urban avenger front (with token female thrown in for good measure). Not like Charlton had many others to fill those shoes... the original Blue Beetle had not returned yet (but would soon after), Son of Vulcan was no longer relevant, and Judomaster was stuck in World War II with no way out (until the Crisis time-shifted him to the present).
Next week we'll dissect two more attempts at revitalizing the Sentinels for a more jaded 1990's readership, and whether they elevated the game of second-string superheroes as had their Mighty counterpart at Archie.
Posted by Doppelgänger at 4:28 PM 0 comments 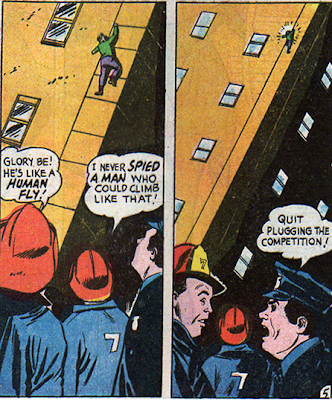 ﻿While Charlton Comics got no love from neither DC nor Marvel during the mid to late 1960's when their action heroes debutted to modest success, at least Mighty Comics gained some notoreity with DC. Or did they?
From Showcase #69, which spotlighted a non-descript fictional rock band named the Maniaks, comes this scene of a "Human Fly". At first glance, this might be perceived as a wink and a nod for the Fly.
Only by the time this issue hit the shelves in July 1967, the only superhero title published by Archie was Mighty Comics which assumed the numbering of Fly's title. And this title featured the Shield and Hangman, with the Fly history by this point.
Upon closer examination, the second fireman's comment "I never Spied a Man who could climb like that" seems to be a tip of hat to a certain Peter Parker instead of Thomas Troy.
Posted by Doppelgänger at 6:56 PM 0 comments

Watchmen and Friends: The Missing Issue! 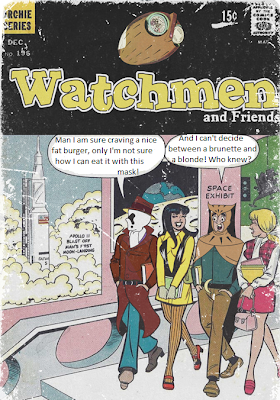 ﻿Who watches the Watchmen of Riverdale?
Why Principle Weatherbee of course!
Who would win a battle between Captain Pureheart the Powerful and the Horned Owl?
Depends on whether Mr Owl sends his gal-pals after Cap, given his weakness towards kisses and all.
Why would Jughead where that odd mask?

C'mon, if you had that kinda face, wouldn't you prefer a big huge inkblot where your sourpuss was?
Who is Betty if Veronica is the Silk Spectre?
Well, she IS Superteen in her alter ego, so...
Who would win between Silky and Supes?
That's fodder for another post, someday perhaps?

(P.S. Apparently Arche DOES like Watchmen... despite our earlier post to the contrary!)
Posted by Doppelgänger at 8:47 PM 0 comments 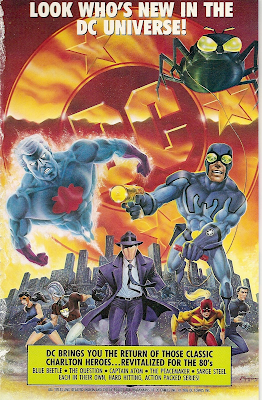 This advanced solicit from 1983 1986 indicated a new wave of characters debutting to help revitalize DC Comics, which suprisingly turned out to be recycled Action-Heroes of old. Oh sure, they seemed like the originals... on the surface. Well, with one notable exception.
Captain Atom in his mostly silver exterior lost his humanity and made him more a sentient weapon than what he was meant to be, his world's premier protector. Which makes sense, as he and his cronies were assimilated into the DC collective of characters, his new owners felt he had to stand out. As a result, he may have become more marketable but less marvelous. And he wasn't alone.
Nightshade, Peacemaker, Judomaster... all background players with no relevant tales told. Sarge Steel was useful as a "King Faraday" type of government intermediary with the meta-human commmunity. The two true stars in this crop were Blue Beetle and the Question, although each lost something to gain something more.
For Beetle, he was made into the class clown with a sizeable intellect, and this helped to enhance his persona. And the Question... lost his objectivist stylings and molded himself in a more eastern philosophical bent that would've more appropriately been grafted upon Judomaster... of the missing-from-this-ad Peter Cannon aka Thunderbolt.
In the end, decades after their purchase into a major comics publisher, which of these characters has a continuing title spotlighting this adventures? A sizable fanbase? Enduring legacies?
Perhaps leaving them to languish with the now defunct publisher in Derby, Connecticut may have enhanced their value in the eyes of the reading public-at-large?
Posted by Doppelgänger at 12:00 AM 3 comments

﻿Yes yes... the day has finally arrived. It had to... after all this is a Charlton blog. And overlooking one of Earth-Four's finest is unacceptable.
Okay, he actually ISN'T one of its finest. Still, he scored several appearances in the rocking 1970's, so Jonnie Love is going to be getting some... well... love on this blog. Well if not love, certainly a notable mention.
Interestingly, Mr. Love has several features in common with a prime character of the 1970's mini-resurrence of Archie Comic's Mighty/Red Circle line. Specifically a modern version of a modestly famous MLJ hero from the 1940's, the Black Hood. Or rather, his nephew Kip.
While Jonnie Love was a poor lost soul simply trying to find his way home... how he got so far from home that it took him nine plus tales just to get a bit closer... it beyond your humble host. Regardless, he sported a fancy helmet (designed after cracking his head during one of his mis-adventures) and a not so stylish motorcycle. Does that thing have, like, ten horsepower?
A few years later, former police officer Kip Burland debutted as the latest in a long line of Black Hoods. Only instead of donning a snazzy costume like his predecessors, he wore a leather jacket and jeans, with his one distinctive feature being the black hood he wore on cases. Oh, and a sweet ride that traversed land, sea even air (well, the one loaned to him by the Comet did the latter). 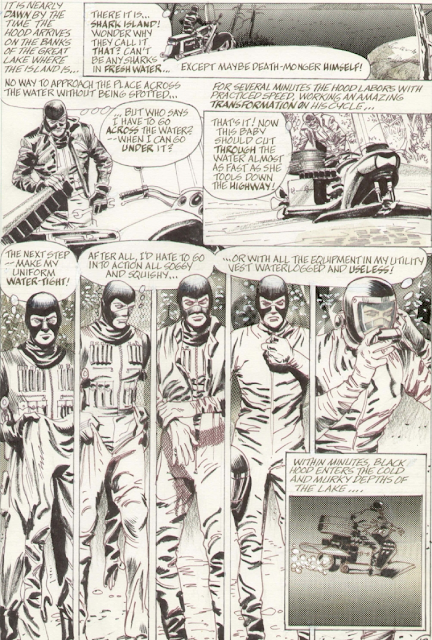 While Love's tales were a bit formulaic, with the lovesick hero falling into bad situations all along his journey while attracting every woman in his path, Hood's were simply classic. A disenfranchised officer of the law deciding to strike out on his own as a private investigator/costumed avenger to clean his town of its corruption.
So while Love never stayed in one place long, Hood kept his feet firmly planted in his native burg to cure it of its ailing evil elements. Perhaps if Love had a ride like Hood, he'd have done the same. Or maybe, if Hood had the found love again... and again... and again... like Love, he'd have ventured outside his confort zone more. Who knows?
Posted by Doppelgänger at 12:00 AM 0 comments 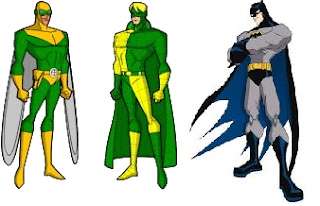 ﻿Previously we have considered the brief forays into multi-media of the Charlton and MLJ characters. Sadly, there has never been an animated forum for the latter, which may have had the potential to buoy Archie's hero brand to success.
True some minor comics publishers have attempted this only to quickly close shop on their television venue. Nevertheless, given the subtle but strong staying power of such concepts as Teenage Mutant Ninja Turtles and Sonic, with lengthy publihsed series in comic book forum following their cartoon appearances, its not hard to conceive of something similar transpiring with the Fly, Web, and the rest of the Mighty Crusaders.
Now that these characters have seemingly defaulted back to Archie after their latest failed attempt over at DC, now would be the time to capitalize on this concept. And of course, a guest star appearance by a certain Dark Knight (be it in DCAU or Brave and Bold form) wouldn't hurt. C'mon Bats... you bosses owe these under used assets that much for what meager profits they gave you through the years?
Posted by Doppelgänger at 11:14 AM 0 comments 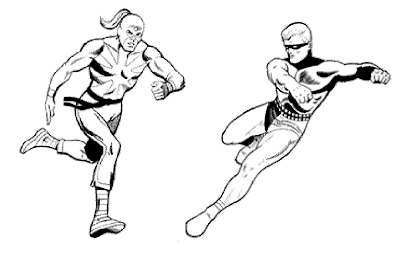 ﻿Even within a comic publisher, often creators will conceive characters with similar attributes to function within the same fictional universe. Sometimes with startling results... assuming they are able to interact to any measurable degree.
Sadly, while Judomaster and Thunderbolt were appearing in their own self-titled comics under the Charlton banner of the late 1960s, ne'er twain the two did meet! Perhaps there was a reason.
While each was distinct in specific ways, each spawned from the minds of equally gifted artist writers, they had some fundamental similarities:
Were they to have met in am epic duel, what may have transpired?
Undoubtedly, Peter Cannon's superior mental disciplines coupled with his muscular conditioning would more than match that of Rip Jagger, if for no other reason than the special scroll that Thunderbolt had access to as well as decades of training from childhood onward, as opposed to Judomaster who was trained as an adult. Still, after the requisite superhero smackdown ala Marvel Comics style, the two heroes would then team-up to protect the world from any threats that may endanger their precious Earth-Four!
Escelsior!
Posted by Doppelgänger at 6:25 PM 1 comments