Friday Fiends: Brains Behind the Braun 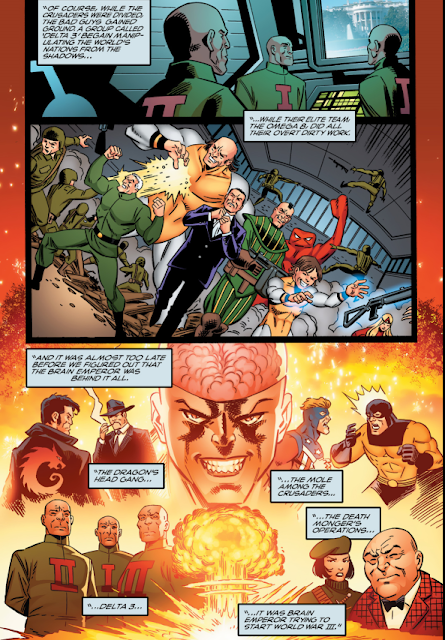 During the resurgence of superheroes in the early 1980s, leading to the reformation of the Mighty Crusaders, wasn't happenstance. The alien Brain Emperor had reemerged from his seclusion set on conquering his adopted world, with the goal of one day using it as his base of power to control the entire universe... including his home world he was exiled from so long ago. However, knowing that the threat remained of metahumans, such as himself, who could forestall his schemes... he initiated a long term plan whereby he recruited a number of fellow felons. Some costumed, some not, yet all troublesome thorns in the sides of those who opposed him.
However, there was an even greater threat to the Crusaders, one of their own who was a mole planted amidst their group to undermine it from within. Who would this threat be? While at this time it hasn't been revealed, visual clues in our next Team-Up Tuesdays may reveal his identity.
____________________________
Nothing this overt occurred on the parallel Earth where the Sentinels of Justice operated, as Doctor Spectro had largely been erased from the equation through his various battles with arch-foe Captain Atom, and hence never had the opportunity to effect change as had the Emperor.
Posted by Doppelgänger at 8:10 AM