Mix in two guys in clown suits whipping ropes around, and two gals sporting alien jewelry to dassle friends and foes alike, and you have today's entry. From Charlton Comics, the larcenist pair, Punch and Jewelee: 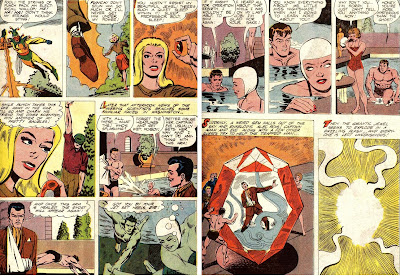 So Punch uses his flight to maneuver above his intended victims, then zap them with his electrical strings to turn them into living puppets? Got it. And Jewelee uses her jewelry (get it?) to mesmerize and stun her adversaries? Yep. Seems their latest ploy is kidnapping poor Alec Rios (whom we met this time last week) while he's entertaining his frienemies Captain Adam and debutante Eve Eden, whom we'll next see in their spandex clad alter egos confronting the diabolic duo of devious deviltry. Lest we forget, let's meet our other...far nobler pair of power players, Hangman and Fly Girl. 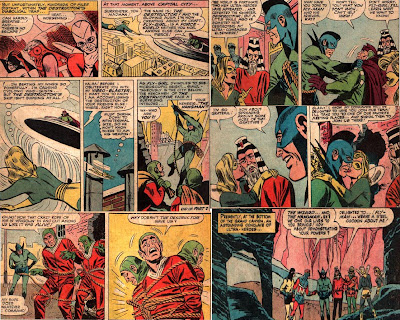 So Hangman and his miraculous multi-purpose rope seems to demonstrate their usefulness to the Mighty Crusaders, and along with the Wizard  both seemed to endear themselves to ctress Kimberly Brand, she of the Fly-Girl brand granted insect abilities like the Fly's thanks to a gem ring she wore from another dimension. Decades earlier, Hangman was originally Bob Dickering, kid brother of the Comet who adopted his costumed alias shortly after watching his brother seemingly perish (don't worry, he was revived). How he claimed this rope is a mystery left unexplained.
And what of the origin of Punch and Jewelee with there wonderful gadgets? The devices originated from  the  Sunurians and then landed on Earth: 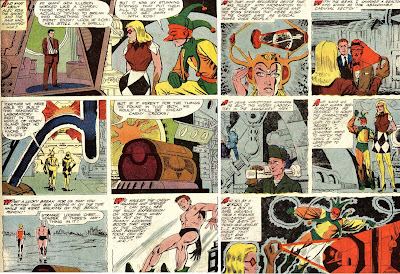 Returning to the tale, the comedic criminals soon face their stiffest opposition from the Agent of the Atom and the Darling of the Darkness: 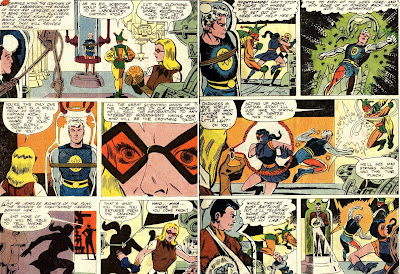 That sneaky Ghost, snatching away the ill gotten gains of his criminal cronies right from under their nose. And with Punch...that's saying something! Both pairs seem evenly matched thus far.
And all is not peachy keen even in the campyverse of 1960's Mighty Comics, as we soon learn that the temptation of ill gotten gains is to powerful a lure for the newest Crusaders: 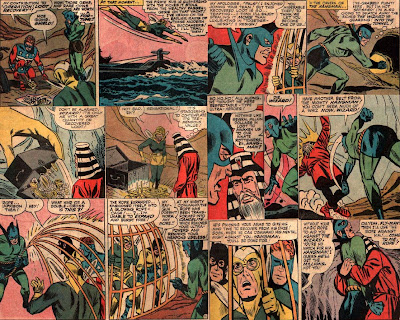 Hangman's cancelite was potent indeed! Shortly thereafter he cancelled the entire Mighty Comics line! By we digress, as Hangman and Wizard quarrel amongst themselves (over riches, or perhaps Fly Girls kisses...me thinks?) mustached Comet follows the mustached Rios' lead  by causing things to disappear in mid battle. much to the chagrin of our resident bad guys. This results in recently revived rotten rogues reeking revengence!!! 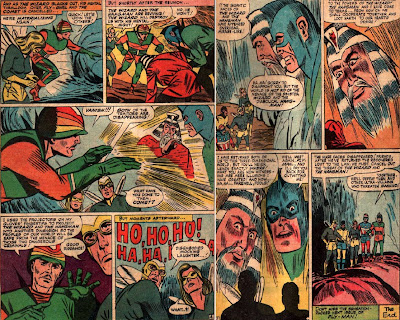 Back over at Charlton, things are heating up towards a climax as the plundering puppeteers get all they could ask from Capt and Shady: 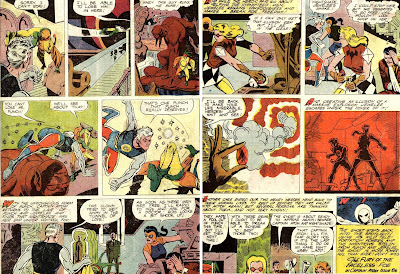 In another go around with the heroes-turned-villians, Hangman attempts to rope the affections of that fly...girl and take his chief competition out. To bad the Black Hood has a different thought on the matter leading to the painful realization that this is NOT the way to pick up our heroine. 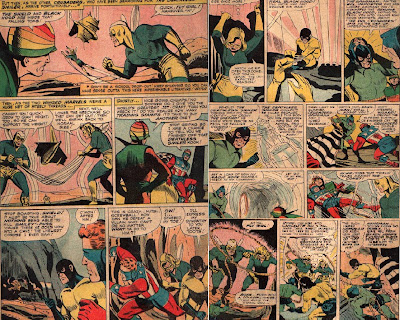 Hangman eventually reformed, and Fly Girl eventually ditched the Fly, yet they never made it back into each other's arms. Punch and Jewelee eventually reunited when their world was figuratively, and quite literally, falling apart. An adventure for another day, perhaps...
Posted by Doppelgänger at 12:00 AM