Charlton had an inordinate number of "street-level" superheroes, i.e. non-powered costumed crusaders. The only ones that had demonstrative superhuman attributes during the silver age "Action-Heroes" era was Captain Atom and Nightshade. Nevertheless, these individuals harkened back to the 1940's Justice Society of America, which also had several "normal" members amongst their ranks. How would these twin teams compare in a head-to-head matchup? Let's see: 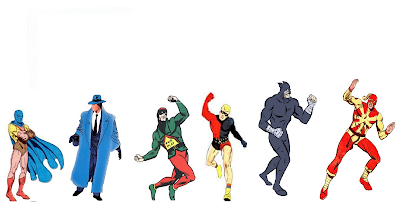 Posted by Doppelgänger at 12:00 AM

Seems like phasing into shadows would give Nightshade the upper hand.