Today's entry is a comparion of the brief mid-60's runs of two blonde bombshells. Both athletic on a mythically Olympic level that at times dwarf imagination in their feats of fortitude. Both are intellectual giants immersed in scholarly studies that seem to contradict the fisticuffs they invariable are drawn into. Both prefer a similar style in clothing of the jigsaw variety.
We present our two participants: 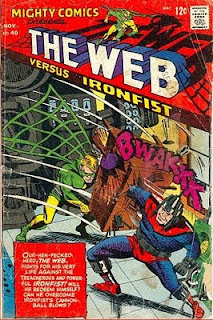 The Web was first introduced in Zip Comics #27 (July 1942) and had a brief run in MLJ Comics. A criminologist drawn into the life of crime fighting by a wayward sibling, he later retired and married his sweetheart Rose. When they were young and in love, she approved of his dual identities. However, as domesticated blissed settled in for the couple, Rose perpetually insisted that her retired heroic hubby stay retired. Invariably, he was always drawn into crimefighting such as in the above cover appearence in 1966 when his wife gave out his identity over the radio, and an old adversary came a calling on the Web's wife and mother-in-law. In each silver age appearence, John Raymond would have to rationalize the Web's existence to his mate. His favorite mantra to his foes was "you've been caught in a web of your own making". His tales, as were the norm for Mighty (MLJ) of those days, were humour oriented with a splash of action mixed in.

A counterpoint to this approach is that taken by Peter Cannon, the Thunderbolt. The orphan of a heroic couple who gave their lives to save a Himalayan monastary, he was raised by the wise denizens of said monastary until he became worthy of being the "Chosen One". Sent back to civilization (in those days, New York City) to a society he despised for their corruption, he was continually drawn into conflicts thanks to the relentless verbal proddings of his pal Tabu (also from said monastary). Many of his conflicts were orchestrated by the Hooded One, another disciple of Cannon's homeland that felt jilted when he hadn't received the prized scrolls and knowledge contained therein. Thunderbolt first appeared in January 1966, the same year of the Web's reppearence (or first appearence, if you believe a later story that the 1940's Web was actually the father of the current one...which works only when you account for both father and son marrying a pair of Roses). Thunderbolt's favorite mantra was "I can do it...I must do it...I will do it". He hates the lawlessness that fascinates the Web.
Comparisons are aplenty for these two non-powered human dynamos. Both had the aforementioned costume style sense, with neither found of wearing those masks that mat down the hair so common among most hero folk. Both were henpecked, one by a loving companion to quit his career he loved so much, one by a loyal companion to continue a career he hated. Both used their brain as much as their brawn to outwit their enemies. Both were keen on repeating their mantras during tense situations. And both quitely faded into oblivion (until DC purchased/leased them both) after their publishers' abandoned the heroic fad.
Posted by Doppelgänger at 8:56 AM