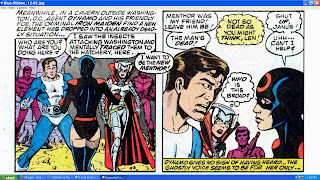 First the legendary team, originally published in the mid-1960's by Tower Comics known as The T.H.U.N.D.E.R Agents made Wally Wood a legend with his sleek artwork, and the characters have been resurrected from the publisher netherworld more times by more publishers than just about any other character or group of characters. In the early 80's this included Red Circle (at that time Archie Adventure Series) helped distribute a modest run which climaxed in Blue Ribbon Comics. Herein lies the first meeting of superstrong Dynamo and mysterious mentalist Menthor (and the guy she's speaking to in her head was Janus, the late Menthor that preceded her). 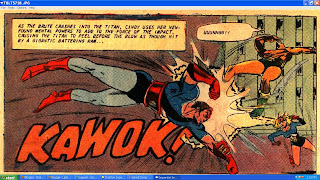 Our other consideration today revolves around perhaps the most obscure of characters over at Charlton (aside from licensed properties), the Sensation Sentinels. Or as the Sentinels...of Justice as de facto leader Helio initially labeled them (a name later adopted by other Charltonites, Charltonoids, Charltonians?). They lasted a whole six issues, never to be seen again despite the promise of continued adventures. They solely resided in the backpages of Peter Cannon, Thunderbolt #54-59. The following panel introduces us to two of the three members, the superstrong Brute and the scintillating psychic Mentalia.

By the way, the villains in the background our Uber-Awesome femme fatale Iron Maiden and an android named Titan. Both teams began their adventures once they obtained three garments of power created by dying scientists. For the agents, it was the Dynamo's belt (superstrength), a cloak (invisibility) used by an android named Nomanm and Menthor's helmet (telekinetic/telepathic abilities). Wait, two androids? Noman AND Titan??? What are the odds in the 60's of androids appearing in comics of that period? heh.
The Sentinels likewise were bequeathed three garments of power, Brute's gloves (superstrength), Mentalia's tiara (telekinetic/telepathic abilities) and a backpack (for flight or rather to "reduce weight" with propulsion added in apparently for good measure). The latter was worn by a member that was out of commission in the above panel.

During our next Team-Up Tuesday, we'll be introduced to an immortals (of sorts) that meet our cold war gladiators.
Posted by Doppelgänger at 1:55 PM