While the world clamours for a wall-crawling wise cracker derived from a spider bite, insect heroes are nothing knew. Consider our two entries for today, the Blue Beetle (aka Dan Garrett) and the Firefly (aka Harley Hudson). Two red-haired scientists favouring similar color schemes in their clothes, two men who harnessed the power of insects to grant them wonderful strength, agility, and bio-illuminesence. And they made their marks in the golden and silver age (sort of). 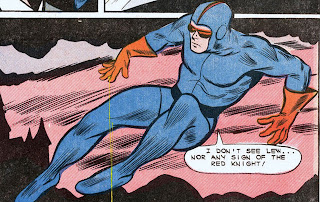 Whereas Blue Beetle of the mid-60's added a "T" to his civilian identity and a scarab to his heroic alias, he seemed to be on the surface the same man who pounded a beat as a officer hyped up by Vitamin K pills from the local pharmacy. Except now, he could fly and zap other bugs (poor Preying Mantis never had a chance, either time they clashed). Firefly may not have dug into ancient Egyptian mythology to gain his powers as did the Beetle, but he apparently dug into the right research material to obtain the means to replicate the physically prowess of his namesake. And later, of its brightness to stun foes.

Alas, Firefly lasted only 20 issues in Top Notch and a sole appearence in Mighty Crusaders #4 (attempting to join said group). Blue Beetle didn't do much better in the silver age with only about 10 appearences (11 if you count his death and intoduction of a successor).
Of course they both were brought back in the 80s. One as a coral clone from Atlantis, the other as a resurrected Beetle (who was in some perpetual cycle-thingy where he was continually recycled from police officer to archeologist to secret agent) and later an android replica. Swan songs for trend setters without whom, perhaps we wouldn't have a movie franchise about the trials and tribulations of a common house hold pest. 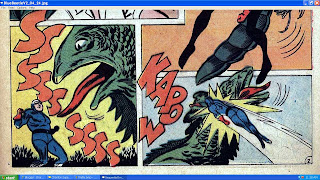 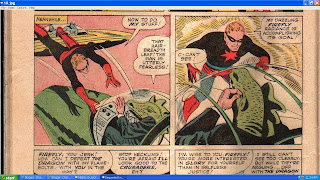