This week's duel orginiates from Blue Beetle #5 (November 1965) and the Fly #4 (December 1983), both products of Steve Ditko's legendary pen. Our two aforementioned heroes in their self-titled books faced a pair of delusional anti-socialists, each possessing a creative spark and tapping into "something" unique that provides them tremendous physcial attributes and obsessive psychological profiles. Meet Hugo, alias "Our Man", an artist who recreates a statue that symbolizes man's failures...and Professor James Stoker, the Mighty Man, a scientist who recreates his former superstrong evil alter ego wiped away from history by the Fly's powerful mentor, Turan.
Here we see the two aspiring social deviants remaking the images of their hero destroyers: 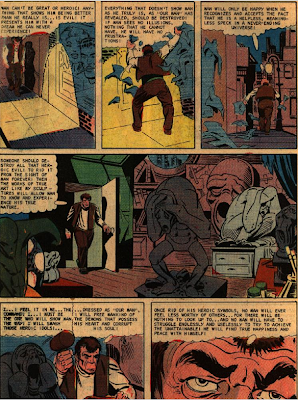 For Hugo, its pounding some sheetmetal into a mobile version of the morbid Our Man statue, with the goal of granting mankind happiness by destroying that which he aspires to...greatness. This guy needs hours of therapy! Yet somehow, the frail creator gains mighty inside this new suit of armor he dawns. 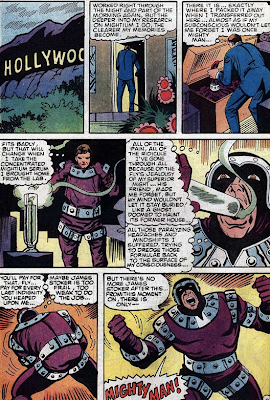 For Professor Stoker, he experiences some faint recollections of his costumed alter ego, himself a ravager of noble concepts. As he once more pieces together a formula called Mightium, Stoker quickly fills into his costume...ready to take revenge on the man who stole his once promising career...the pesky Fly!
As events unfold for both anti-heroes, we note Ditko's flair for the tragic idealism that catches so many in the form of individual dispair. He's directly calling out those who would diminish heroes and reduce them to mere mortals, and both "Men" show that the mighty of self and the might of a collective following are not enough to conquer the indominable spirit of true heroes, like our Bug Bouters: 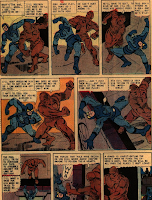 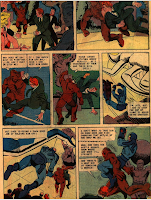 As expected (after all we're not reading Our Man #5 and Mighty Man #4), the intrepid insects get the better of our muscle over message men. Both end up looking frumpy and worn out, the Prof due to an adverse side effect of over exertion while the Mightium was in his system, while Hugo's face always looked that way...that poor sad sack sucker.
Dueling Ditko Rating:


1.) Story Drama: Interwoven in these two tales is the social pressures the befall our heroes. For Ted Kord's Beetle, he must face an unweildy crowd of social malcontents inspired by the destructive cause of their statue, Our Man, brought to life. For the Fly's Thomas Troy, his own repressed memories of a prior battle versus the deadly Mighty Man interrupts his court case, causing the judge to suspect our heroic attorney of having a morning cocktail...a further jab at his professional credibility. The battles themselves displayed true grit on the part of both heroes. However, given lesser to work with against not only a psychotic foe but a hostile crowd of groupies, Blue Beetle's tale tops this category for drama.
2.) Imaginative Use of Abilities: While both incredible insect display apt acrobat manuevers, thanks in no small part to Fly's wings and Bettle's Bug, we see several uses of the Fly's buzz gun including sleep tranquilizers that take out a pair of leopards hungry for their prey, and a thread line strong enough to hog tie his Mighty foe. This gadget tips it towards Fly. 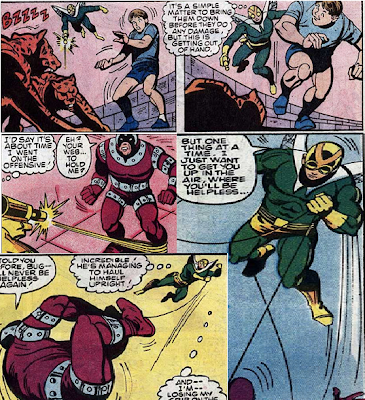 3.) Adversary:  Of the two, Mighty Man had some staying power and he originally appeared in March 1966's Fly-Man #36 (hence the repressed memories). However, Ditko apparently never fully *read* that initial appearence. Otherwise he would have realized that the reason Turan intervened and aided his apprentice the Fly was because the Mightium radiation that Mighty Man dervied his powers from caused the Fly to be stuck in that form. Had this been revisted in the current story, this may've given the Fly the edge in the above Story Drama category. As far as an adversary, Our Man was a conceptual style over substance kind of character, with no explanation as to exactly *how* he can go one-on-one with the Beetle (and with Vic Sage, the Question's alter ego).  MM gives the F-Man this over BB.
4.) Intangibles that Worked: Ditko had a more finely woven theme in his Beetle tale than in the stock story he wrote for the Fly. This issue was just prior to his developing plot line of Attorney Troy losing his license to practice and having to search for the individual(s) who framed him.  Hence the nod goes to Beetle.
And so we end in a draw in this bout. The Fly is still ahead from the previous round but we still have a ways to go to see which character Ditko gave the edge to. See you next time!
Posted by Doppelgänger at 12:00 AM