Abby Ladd is a reporter we previously considered when discussing Professor Koste and Doctor Collins, the radioactive fiends that torments Captain Atom and Shield. During the same course of events, Laureen Smith became acquainted with Shield's alter ego Captain Lancelot Strong, and found herself in a three-way love triangle with her and Collins monsterous alias Deathstar. What first impression will they give their military mystery men? Will Abby and Lauren capture their hearts? 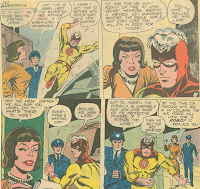 Laureen has a cocky attitude yet soft demeanor and Abby has all the tact of rusty nail.

Rowl...Abby retract them claws! Seeing Nightshade paling around with her favourite atomic punching bag can't be a confidence booster. At least she doesn't have a toxic stalker like Laureen ...talk about a relationship with a half-life! 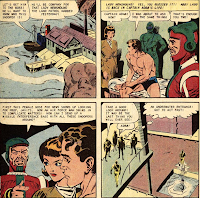 When the always fashionable Fiery-Icer comes a calling, she plays the demure pussy cat with fellow kidnappy Captain Adam. Laureen is decidedly more impressed with her man's moves. 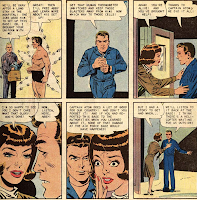 Abby  is pleasantly surprised to see recovering Adam.. Laureen just wishes her sleeping prince would wake up...which he does to get himself killed!
Posted by Doppelgänger at 12:00 AM