The following neatly fits under both categories of Team-Up Tuesdays and Friday Fiends, as the arch-villians created small armies of like-minded pawns to do their bidding. Today we'll focus on the gangs they spawned to due their evil bidding against the good Captains, Strong and Adam (also known as Sheild and Captain Atom), and Friday we'll go back in time to witness their first appearences and origins.
Let's get started. Eterno the Tyrant first appeared in July 1966's issue of Fly-Man #32, and Doctor Spectro first appeared in Captain Atom #79. When they next appeared, in Mighty Crusaders #s 1-3 and Captain Atom #81, respectively, they seemingly returned from the dead. In actually, both escaped doom from their previous encounters with our heroes and sought revenge. Using their indominable mental force that bent men to their will, they spawned super powered costumed gangs...each sharing the mind of their masters directing their every action. 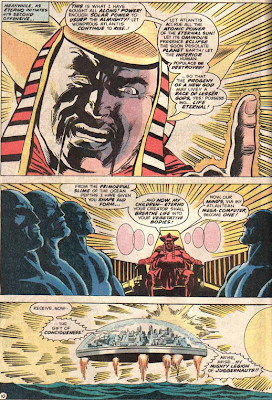 Here we see Eterno, in his Atlantean fortress, as he is about to commence transferring his mind into seven genetically engineered bodies with the goal of wiping the Crusaders off the face of the Earth! And so are formed, the Mighty (or Malevolent) Legion of Jaggernauts! And since you are what you eat, assuming these vegatable men are vegatarians, they're a litle green around the edges. They'll soon see that the grass is not always greener on the other side. 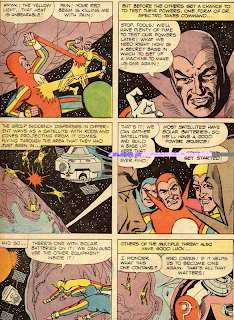 Doctor Spectro reconstitutes his energized form only to find that the master of moods is now in five individual bodies. Each manifests a slightly different personality or aspect of the original doctor, and they soon realize they need to reform in order to stand a chance at conquering the world as originally intended. Thankfully, they find a handy satellite base (decades ahead of time as to technological advancement) to investigate how they can become one. 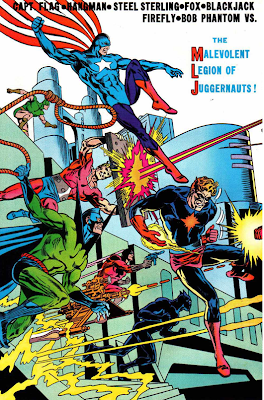 Whether his reason for selecting these identities was a lack of originality, or to get under the skin of his old foes the Crusaders, Eterno the Tyrant selects a colorful brigade of classically clad minions to due his bidding. Each seems to display near limitless energy emitting powers and superhuman physical forms. Must be an organic diet, yes? 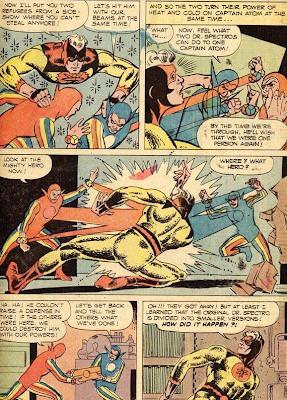 Captain Atom discovers that his old foe has returned with a vengence, and quickly realizes that he has his hand's full combatting the diminutive devils. This leaves hin scratching his head...not realizing that he actually is about to face not one or two but five Doctor Spectros shortly! How will he triumph over their superior numbers and single minded strategy? Or is Team Spectro more divisive internally than it seems? 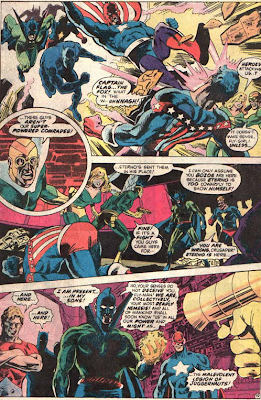 The Malevolent Legion of Jaggernauts quickly track down the Crusaders whereabouts at the Shield's secret mountain headquarters, and bring their host a house present in the form of quick de-feet (ouch). It becomes quickly apparent to the assembled gathering of guardians that these unwelcomed guests are not their old allies but are something wicked! And possessed as if of one solitary mind guiding their every action. And with not an ounce of fear in any of these sinister solitary forms. 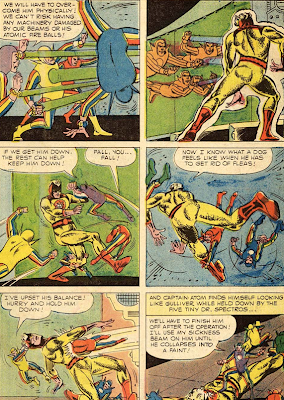 In a return match against Captain Atom, the Doctors Spectro combine their limitless energy against the human nuclear furnace. And they make some headway,  thanks to the tactics employed by the purple Spectro. His agenda, however, is different from his fellow Lilliputians...he actually is good and wants to assume dominant control over the reconstituted Doctor. He realizes the good he could perform once he assimilaties his fellow beings.

The Crusaders make quick work of the Legion of Veggies as they lose their power source...the sun...when the Comet's uses his spaceship's tractor beam to pull Eterno's raised city base Atantis away from Earth and into the sun. While the Crusaders are whisked away thanks to Darkling's teleportation abilities, the Jaggernauts themselves never return (although Eterno does return at the dawn of the next century to join other villians). 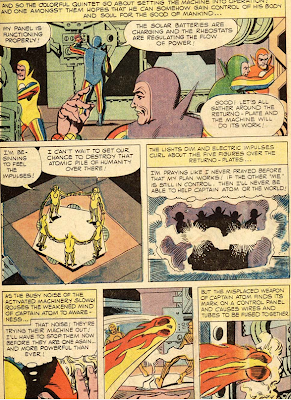 The Spectro Doctors bask in the glow of victory over the Atomic Captain, however right when they are to merge and become one sentient being, Cap throws a patented atomic fireball at their machine's control panel. The result? One Dr. Spectro remains, weakened and led away by the authorities. However, the purple persona murmurs to himself. Will he turn over a new leaf? Alas when a Crisis occurs, he is once more in the villain's camp.
Next on Friday Fiends, we dissect the secret origins of the masters of moods before they multiplied into the teams we just considered.
Posted by Doppelgänger at 12:00 AM