This go around, the bug boys (Thomas Troy, the Fly, and Ted Kord, the Blue Beetle) take on a couple of strange characters while facing their own legal morass. Several parallels immediately become evident in Ditko's use of story telling device: the individuals against society's prejudice, the female protagonist giving the main character an "atta-boy", the grumpy old curmudgeon that befriends the young hero, and of course the eccentric egocentrics...Uncle Jarvis in the Beetle's story and Ivey in the Fly's tale. Let's dissect these mini-masterpieces, shall we?

Our heroes are conforted by the damsel that captured their heart. One stays to comfort, one leaves to do the same. Guess attorney's are made of stronger stuff than scientists.

As the story develops, we learn that Ted had history with bad old uncle Jarvis which caused his problems. And problems are something Thomas wades through without sweating.

Ted is inspired by cranky old Jarvis to spark his own creative ingenity, creating the Bug. Thomas acquaints himself will cranky old Bill who himself is involved with a creative fanatic and his demented domicile.

Beetle battled boatloads of bots bravely. Fly can't seem to handle one wacky looking fiend with foul facial hair. At least we're getting to the bottom of things now that our heroes are at their bases.

An armada of angry androids? No worries if you are our boy in Blue. Superpowered insect taken out by one freaky dude? Obviously brain wins out against brawn when Fly's freak beats Beetle's battling brainless bots.

1.) Story Drama: Dikto weaves amidst each tale a thread of oppression from Troy's former associate Pete and Kord's favorite primary police police, Lt. Fisher. The former was framed for jury tampering, the latter suspected as to the death of the previous Blue Beetle's civilian alias Dan Garrett. The main portion of the tales involves Ted's eccentric scientific uncle Jarvis and his agenda to create destructive droids to gain unlimited power and of eccentric wealthy recluse Denny Jones and a "crooked house" that was willed to him by an Ivey, a disgruntled man who designed the house to torment his former associates who had betrayed him. Definitely Ditko's latter days, when he chronicled the Fly's adventures, proved how truly eccentric the comic creator himself was. As to story drama, the linear approach of the Beetle's tale, involving the death of his friend and inspiration, definitely has more pull than a tale of characters like Ivey and Denny who we aren't as invested in.


2.) Imaginative Use of Abilities: Hands down the Fly wins with his use of his wings to cause a tempest in a tea pot and expose Ivey as a disguised femme fatale. Those are some powerful wind gusts that dude cooks up. 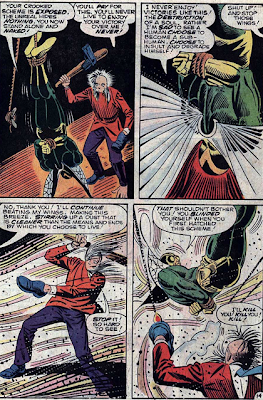 3.) Adversary: While the imaginative use of Ivey with shoes worn as gloves and guns sticking out of loafers is inventive, the actual Crooked House has a novelty and charm which seems to catch the Fly initially unaware. Whereas the secret Pago Island base and faceless androids of Uncle Jarvis..yawn.
4.) Intangibles that Worked: Again the Crooked House takes this category for setting. However, for a tale of tragedy such as the end of a classic hero like the Blue Beetle...that is truly timeless. And the added flair of having Ted's girl friday Tracey there by his side, while Fly's ex Kim ended up drifting off into character limbo (she did attempt to provide him morale support at the beginning of the story however) helps the Beetle to win this.
So this time it ends in a draw, 2-2 for the bug boys same as in Round 2. Fly is barely ahead...can Blue Beetle battle back? Can Fly pad is slim lead? Find out next time.
Posted by Doppelgänger at 6:28 PM