We break a pattern this week, as this post should be retitled "Friday Fiend & Friend" as only one of our candidates is a villain who only appeared twice yet is unique enough to consider among the hordes of other hot and cold criminals. The other is a golden age hero who's initial run was short and rarely appeared since, yet started out as a novel idea. Let's start the latter. 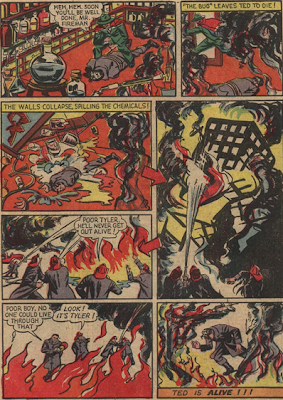 Fireball first appeared as Ted Tyler, fearless firefighter, who as often happened in comics both in the golden and then silver ages was exposed to "those" funky experimental chemicals that always seemed to be lying around. Thankfully his buddies are there to bring their unconscious comrade from the flammable structure...or would he have survived considering what was about to occur within his mutating body? Only his unknown creator knew for sure. 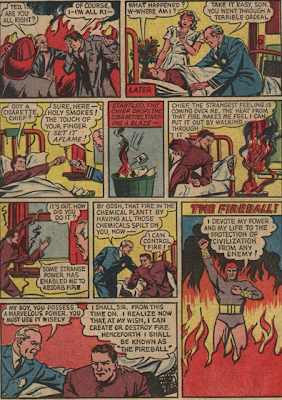 Ted then makes miraculously quick recovery (considering the page count of those 1940's comics) and immediately resolves to use his heat absorption and projection powers to fight fire bugs...and decided to track down the cause of his transformation before others are  then transformed as well into superhuman human torches. After all, who needs the competition in the long-underwear set? He still needed to nail the right color scheme, however. 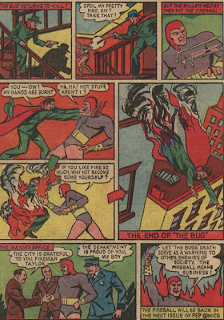 Tracking down "the Bug" (as in firebug), Fireball shows how invincible his powers make him...bullets melt on impact...heat is his to command...his stamina is tremendous and his legs allow him to leap vast distances! And the Bug gets while the getting is good...we're unsure exactly where he landed but we are sure it wasn't pretty. As for Fireball, he continued his career as a one-man firefighting force, preventing fires from getting out of hand and burning bad guys who were their cause.This lasted about a year or so. 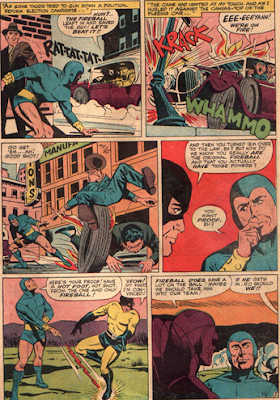 After 11 issues in the back pages of Pep, Fireball's fleeting fame burnt out. He next appeared in the 1960's as a potential member of the Mighty Crusaders, in fact he was the first applicant in issue #4. After an outing alongside fellow flaming fellows Firefly and Inferno then working alongside "too many heroes", he returns to retirement until Archie's Weird Mysteries #3 when he's finally accepted as a Crusader himself. Along with two dozen others! 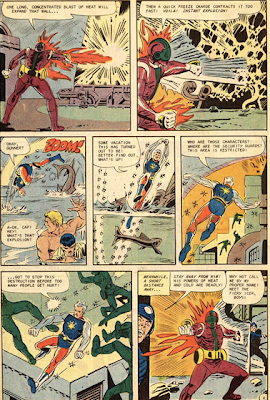 August 1967's Captain Atom #87, a new adversary of our Atomic Ace appeared with an interesting set of abilities, the ability to project scourching heat from his right hand, and biting cold from his left hand...via his projectors attached to his specialized armor. Atom in his alias of Captain Adam, while swimming in the sea, came upon this baddie and his henchmen. And while the hired help aren't exactly pulling their wait, F-I is ready for this new challenge. 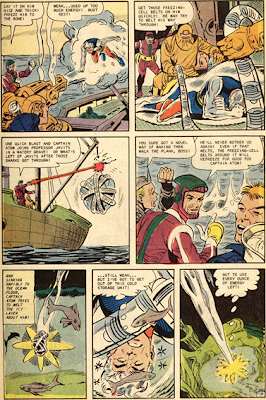 After cornering Atom into a trap which his henchmen sent thanks to their freezing cannon, Fiery-Icer mistakenly believes this is the end of the good Captain...sealed in a icey tomb underneath several tons of ocean. Ah if only he knew what was in store...a battle royale with our hero. Apparently Icer's objective is to disable a new missle tracking station which might have interfered with his "purposes" although what those were is unknown. Was he a foreign agent or simply a criminal opportunist? 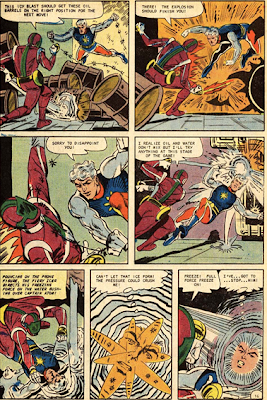 It seems like Icer comes equipped for any opposition, including a nuclear powered sentinel, and uses a one-two combo of heat and cold to stun Atom. Note that Icer doesn't simply rely on his gadget, using his brawn as well as brains to pin down the Atomic Avenger!  The chips seems down until Cap finds the reserves necessary to deck his truly tempermental temperature foe. Knocking out Icer, Atom frees the ever annoying Abby Ladd from his clutches.  Sigh, oh well. 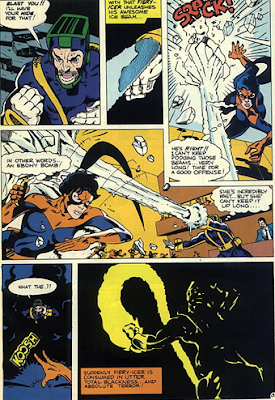 After years in the lockup, Fiery-Icer learns to folly of tying his career to a bunch of green clad goons and instead ties his future to a bunch of...green-red-and-yellow clad goons i.e. Blue Beetle's foes the Madmen as well as the Manipulator and another foe of Captain Atom, Iron Arm. Despite sheer numbers on their side, Icer's sinister Squad is no match for the fully assembled Sentinels of Justice. Still he manages to squirm away from Nightshade, to be seen nevermore.
Posted by Doppelgänger at 12:00 AM