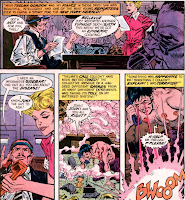 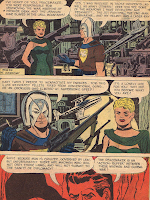 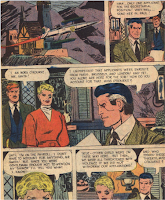 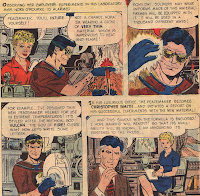 Like Thelma, Nona is terrified at the obsessive nature of her "man". He's more level headed than John. But he's also a big flirt . Who can't commit. But definitely smirks a lot! Because that was cool back in the swinging 60's.
Peacemaker #6, which itself was unpublished, was the last we would see this incarnation of Peacemaker's spunky sidekick. Thelma, however, was the supporting character that WOULD NOT DIE even when her first protagonist boyfriend bit the dust. That's not saying much, as all the Dickering men in her life, even her son (messed up by his father's abuse above) had serious issues that she couldn't help them resolve. Very tragic. But so is character limbo, where both are gal pals are in right now.
Posted by Doppelgänger at 12:15 AM